Sasol Solar Challenge is an unusual race of solar-powered vehicles. This year, the competition took place in the Republic of South Africa where racers had to travel 2,800 kilometers from Pretoria, across Kroonstad, Bloemfontein, Gariep Dam, Graaff-Reinet, Port Elizabeth, Sedgefield, Swellendam to Cape Town. Globema developed two applications that supported the Polish team from Lodz University of Technology participating in the race. Congratulations to the Łódź Solar Team, driving the “Eagle One” vehicle, on the persistence and very good result: 1st place in the Cruiser category and 5th place in the general classification! 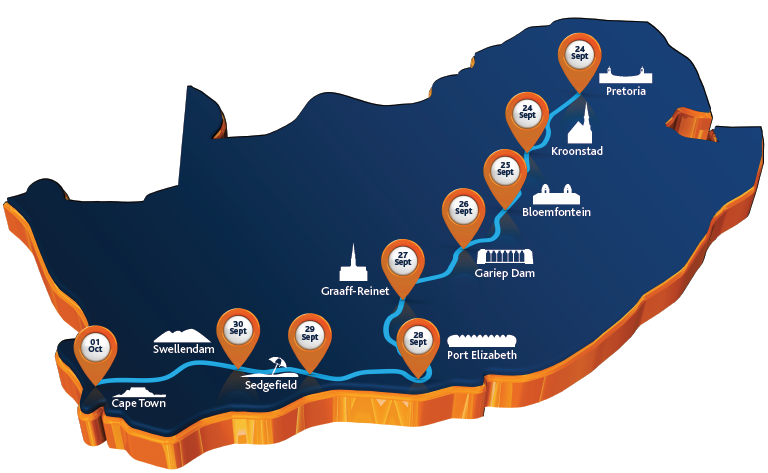 As in the case of most (if not all!) races, Sasol Solar Challenge is  won by the fastest drivers. Here the competition consisted of driving the longest distance within a given day, in a specified period of time. The length of the distance could be adjusted with the number of loop repetitions “included” in the daily route. Therefore, participants had to prove not only their skills in driving the car, but also in selecting the appropriate “energy strategy”. The teams had to optimally adjust the speed in varying road conditions in order to lose as little energy as possible and recover as much energy as possible. Of course it was also necessary to take into account weather conditions (wind and sunlight) impacting the energy balance of the vehicle.

The Route Editor – before each subsequent date of the race, the Route Editor enabled precise specification of the planned route and generation of the profile of hills and weather data for the Strategist’s Application. The Route Editor operates in three modes: edition of the route, edition of the loop and edition of weather data collection. The first two modes comprise the possibility of adding and removing individual and all points of the route. Additionally, the loop editor enables inclusion of the points to those of the route. The planned routes and loops are processed by the Google Maps Elevation API, as a result of which point coordinates (sampled in equal intervals), together with the height, are saved in the JSON output file. Weather data is collected from the OpenWeatherMap service and stored in a separate file (JSON). Together with the Lodz Solar Team we established that the route should be planned in advance, whereas the weather data should be downloaded just before the race, so that they are most up-to-date.

The Strategist’s Guide provides both the car driver and the strategist with access to the current information on the vehicle condition and additional information on the land profile at the entire length of the route, weather conditions, energy balance and number of loops they may travel to unload batteries to a given level. The Strategist’s Application performs energy calculations which help determine the optimal travel speed. The tool provides means to set energy consumption for any section of the route and the preset speed. Taking into account the vehicle parameters, weather forecast (sunlight and rainfall) and the route profile, the application is able to set the optimum average travel speed and the expected number of loops possible to travel within the specified time limit. All location and geographic calculations were performed using GeoTools library, with additional extensions, so that calculations including the third dimension were possible as well. Major algorithmic challenge consisted in projection of the GPS position on the proper position on the route. Problems were generated by the structure of the route, which often consisted of several loops with the same coordinates. Additionally, we had to take into account many unusual cases such as vehicle reversing, emergency loop omission or instantaneous inaccuracies of the GPS module. The final solution proved to be satisfactory and enabled avoidance of problems during the race. The route prepared in the Route Editor and calculations performed therein were reflected in the chart. It was used by the Lodz Solar Team to obtain all information about the situation on the road.

The chart included information such as:

Additionally, the chart offered the option of view scaling, so that less or more details of the route could be shown.

The Eagle One vehicle

During the Sasol Solar Challenge race Lodz Solar Team drove the Eagle One solar vehicle. The car is powered by the sun light collected by 5 m2 of flexible monocrystalline photovoltaic cells mounted on the roof. Energy is stored in the lithium-ion cells with a total weight of 60 kg and capacity of 15 kWh. Fully charged batteries allow the car to drive a distance of nearly 1500 km. The batteries supply two electric engines with a power of 5 kW each. Thanks to them, Eagle One is able to accelerate to up to 120 km/h. Without driver the car weights only 450 kg.

The car was designed to be driven in a regular traffic, so with a little bit of luck you can spot the “eagle” on Polish roads. What’s more, the characteristic line of the body, resembling the shape of a water drop, can’t just remain unnoticed.

Lodz Solar Team is a group of passionate students of Polish universities. The goal of the team is to develop not only the solar vehicle but also promote eco-technologies in Poland. In 2015 Lodz Solar Team participated in the Bridgestone World Solar Challenge. The team took 6th place in Cruiser class, which was the best result among debutants form all over the world, and was awarded with a Safety Award as the only team in the whole challenge.

About the Sasol Solar Challenge

The Sasol Solar Challenge is a competition for teams to design, manage, build and drive solar-powered vehicles across South Africa. The eight-day event sees local and international solar-powered cars travel as far as they can on various roads and loops between Pretoria and Cape Town.

This year teams travelled distances of over 4000 km. The 2016 event, from 24 September to 1 October 2016, traversed some of the world’s most beautiful and diverse landscapes, from desert and savannah to mountains and coastal forest. International teams are attracted to the challenge of competing in an event which covers 2000 km in varying road conditions, and drops nearly 2000 m in altitude.