On the occasion of the 20th anniversary of Globema, we asked our longtime customers to present their implementation of a system based on the Smallworld software. We received a lot of very interesting studies in various forms, for which we are grateful to all authors. Below we present an article based on a story from UPC Poland about using the system based on GE Smallworld Physical Network Inventory (PNI) platform.

UPC Poland has been a part of the telecommunications market for two decades now. Thanks to the passion and vision of progress, backed by investments worth millions, it’s setting trends for further development on the digital services market. One of the key partners supporting UPC in the area of IT solutions is Globema.

The beginning of the journey

The collaboration of UPC Poland and Globema started in 2006 with the implementation of the HFC network inventory system. The project involved launching a system based on GE Energy Smallworld Network Inventory software and its preparation for data acquisition and network design, in cooperation with LodeData’s Design Assistant and AutoCad. The project was preceded by many months of analysis of solutions available on the market and by verification of the UPC’s data resources.

As the result, the main goal was defined: unification of designing and documentation of UPC network, as well as procedures to keep it updated in all regional offices.

At the time UPC was already implementing the strategy of using the latest technologies to build the HFC network. It required enriching the system with functions allowing to design and manage modern CWDM and DWDM optical networks. The rapid progress of the solution was possible thanks to the systems’ flexibility – PNI constantly supports the development of network and services at the fast-changing telco market.
One of the most important elements of implementation was the preparation of standardized format of AutoCAD DWG files. This format was used to import and export data between the Smallworld PNI system and tools such as AutoCAD, which were then commonly utilized by subcontractors in charge of network designing. The AutoCAD file standard prepared back then is still being used by UPC’s subcontractors, in an adapted form. The implementation of data exchange automation tool significantly accelerated the process of handling the documentation.
After implementing the UPC PL PNI system, the key issue was to fill the system with good quality data. Gathering the information on the network (covering almost 2 million households) was a big challenge for all the teams involved in that process.
Many suppliers were involved in data migration process, due to the scale of the problem and current market situation.
The key tool for obtaining data to the UPC PL PNI system was the standardized format of loading data from the AutoCAD DWG file. Standardizing this format allowed a flexible selection of subcontractors as well as reduction of costs.
At the same time, Globema was one of the key subcontractors responsible for loading network data, covering about 250 thousand HP. Globema’s participation in this process significantly contributed to improving the DWG data loader and the UPC PL PNI tool.
In following years, Globema’s team was providing data into the system and delivering another extensions of UPC PL PNI.

The merge of UPC Poland and ASTER

The turning point in the development of UPC Poland and the UPC PL PNI system was the year 2012, in which UPC merged with ASTER network (covering the extent of over 400 000 HP). In order to achieve a high operational efficiency in the shortest possible time, it was necessary to standardize all processes related to service of a newly acquired network. After a thorough analysis, it was decided to use the UPC PL PNI tool and to migrate the data from the inventory system of ASTER – Suntech ALC CARE networks. As a result of organized tender proceedings, Globema became the partner in the process of migrating the data into the UPC PL PNI system.
Due to license restrictions to access the database of the ASTER system, Globema was challenged with migration based on a simplified format of exported data. The shared effort allowed to fully launch processes related to ASTER network using the UPC PL PNI system within 9 months from the start of the project.

Tailoring the PNI system to the UPC Poland needs

The next years of cooperation with Globema were related to adjusting the system in the way it could live up to growing expectations from UPC Poland. The following changes were included:

The decision on upgrading the system to Smallworld PNI 4.3 version was made in 2013. As the IT strategy was to use the standard versions of IT systems, along with the system update, the modules used, specific functions and changes in data model were verified. As a result, the system was cleared of changes that were no longer used.

UPC PNI – one unified system for all

In 2014, there was a consolidation in the UPC CEE group, which included offices from Slovakia, Czech Republic, Romania, Hungary, and Poland. Unification of business processes also entailed a change in IT strategy and the need for standardization of IT solutions. 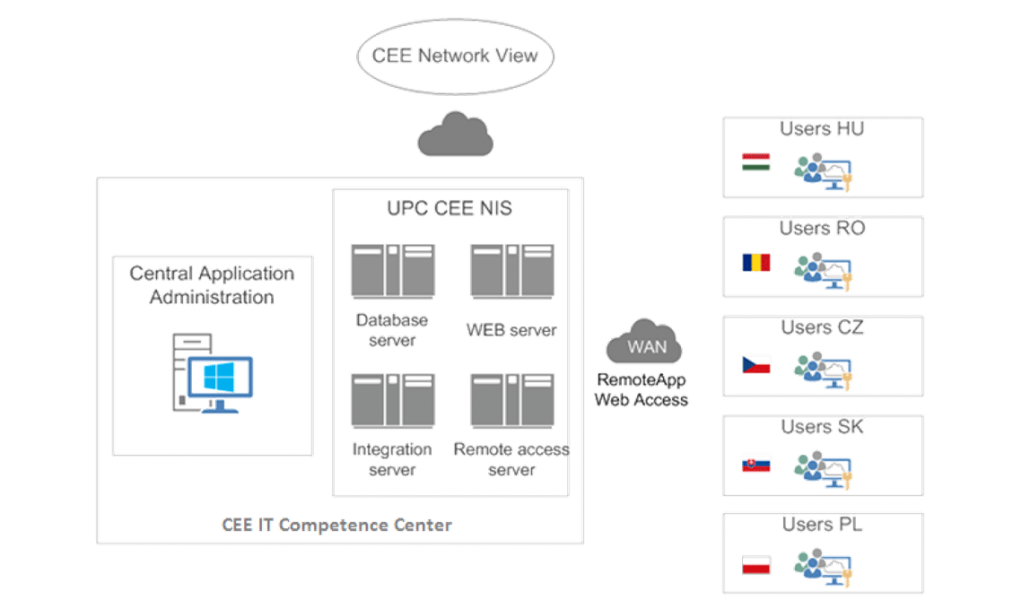 To face this challenge, it was decided to use UPC Poland experience in Network Inventory system and to unify the PNI solution in all countries of the UPC CEE group. After veryfing this concept and making the decision, the modernization of UPC PL PNI to UPC CEE PNI has started.

Currently, CEE PNI system is one of the strategic tools supporting the main initiative in the Liberty Global group – Network Expansion. This program is currently the Liberty Global’s key venture, in which only the best, reliable partners were engaged.

Benefits of the unified UPC CEE PNI system in the group:

Quick system implementation in the next UPC branch offices

Better use of license due to shared project program

Optimal use of IT infrastructure

Realization of this program is planned for many years to come, and choice of Globema as the partner provides the confidence and safety in terms of tools for designing and inventorying the network.